How big will their success be?
Bastienne Wentzel
1 oktober 2007, Conceptuur
Monoclonal antibodies are the quickly rising stars of cancer therapeutics. One of the first fully human therapeutic antibodies is developed by the partly Dutch biotech company Genmab. The first trials with this therapeutic, HuMax-CD20, show amazing results against B-cell chronic lymphocytic leukemia. Genmabs EVP and CSO Jan van de Winkel is thrilled about the success. "I think this is one of the best examples of an academic concept taken to the clinic."
Farmacie 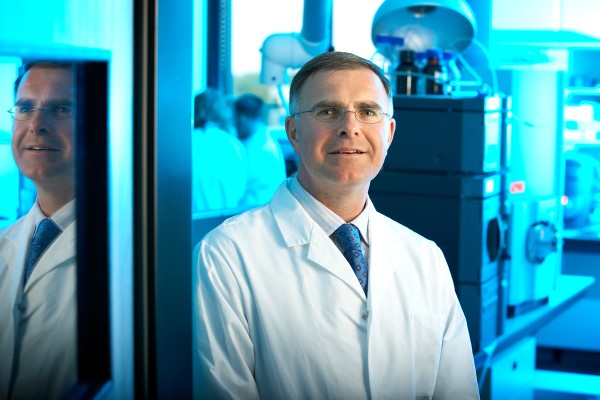 "I have the best job in the world," smiles Jan van de Winkel, and he means it. Van de Winkel is the executive vice president and chief scientific officer of the young Utrecht-based biotech company Genmab. "I think anyone can be successful by just doing what they enjoy most. I have been working twenty years on the the biological and therapeutic role of antibodies. I will show that by using solid, basic, academic science, one can actually create new medicines which mean a lot to patients and at the same time are a business success."
The new medicine Van de Winkel speaks of is ofatumumab, a fully human antibody that targets the CD20 protein on tumor cell surfaces. HuMax-CD20 - the working title of ofatumumab - was shown to possess a great ability to kill tumor cells, for example in patients with non-Hodgkin lymphoma and chronic lymphocytic leukemia (CLL), better than its only competitor rituximab. Furthermore, it appears to be effective against auto-immune diseases such as rheumatoid arthritis. Van de Winkel says: "I think this is one of the best examples of an academic concept taken to the clinic."
The target of the antibody, CD20, is a signalling protein present at the surface of B-cells. Lymphomas and leukemias frequently have CD20 on their surface. However, B-cell progenitors in bone marrow and mature B-cells (so-called plasma cells) do not. This allows healthy B-cells to regenerate after treatment and return to normal levels within several months. It is an ideal target for therapeutic antibodies, finds Van de Winkel. "It is stable, it does not internalise, it is not shed nor modulated, it stays put on the tumor cells. The tumor will not easily escape. We knew when we started Genmab that CD20 was a good target. Rituximab combined with chemotherapy could bring 90% of patients with non-Hodgkin lymphoma in remission," says Van de Winkel.

From mouse to man
In the seventies, Köhler and Milstein developed the Nobel-prize winning hybridoma technology for production of monoclonal antibodies (mAb). These mAb were evaluated to treat cancer patients. Despite some therapeutic effects, antibodies had major drawbacks, including high immunogenicity. In the following years, these issues were addressed. In 1997, rituximab was the first mAb against an oncology target approved by the US FDA. It is a chimeric antibody where the constant regions in the mouse antibody are replaced by human regions, making the chimeric mAb roughly 70% human. "No other CD20 targeting therapeutic antibody is better than rituximab," says Van de Winkel. "Until today this is the most successful biological ever developed. Only ours has the qualities to make it an even better therapeutic."
If the interim results from Phase I/II trials with HuMax-CD20 for B-CLL will be reproduced in the Phase III trials, Van de Winkel has a point. After four weeks, half of the B-CLL patients treated with HuMax-CD20 alone showed objective remission. Rituximab is not effective against this type of cancer in the absence of chemotherapeutics. "We could control the tumors for months even though we were administering too few doses. These spectacular results brought us an orphan drug status and a fast-track registration procedure in the US on the basis of an unmet medical need. There is no other alternative for these patients but death. We hope to obtain this registration in late 2008."
The next step is auto-immune diseases. HuMax-CD20 appears in the first trials to be highly effective against rheumatoid arthritis. "The same cells are targeted. B-cells were recently recognized to play an important role in inflammatory diseases such as rheumatoid arthritis and multiple sclerosis. For the first time in history it has been shown possible to completely stop progression of diseases like rheumatoid arthritis by the use of antibody therapeutics targeted to molecules like tumor necrosis factor (TNF). We are talking about people who can climb stairs again for the first time in years," says Van de Winkel.

Unique target
The advantages of HuMax-CD20 over rituximab have their origin in two differences between the two mAb. First, the origin of the antibody and second, the binding site on the protein. HuMax-CD20 is a fully human antibody, reducing the risk of immune responses. "The chimeric nature of rituximab is not a large problem in cancer patients," explains Van de Winkel. "On the other hand, the activated  immune system of auto-immune patients will easily neutralise the foreign antibody, as is happening with the chimeric rituximab. We have never observed a neutralising response against HuMax-CD20." The Genmab antibody is made with the UltiMab technology platform where transgenic mice are used to generate human antibodies. "In this way we produce fully human antibodies and spare us the molecular tinkering to replace parts of a mouse antibody with human parts. A mouse is also a lot cheaper than a post-doc."
Second, HuMax-CD20 binds to the protein in a unique way. CD20 passes four times through the cell membrane, and exposes two loops on the outside, one large and one small. All existing antibodies generated against the protein such as rituximab bind to the large loop. HuMax-CD20 binds to a novel docking site formed by both the large and the small loop. This has several advantages, explains Van de Winkel. "It binds closer to the membrane and stays there longer. Therefore it kills cells much more efficiently and can kill targets with much lower numbers of CD20 molecules on their surface."
A crucial proces in this is complement activation. The complement system is a group of serum proteins involved in immunity. Complement activation only takes place very close to cell membranes, therefore HuMax-CD20 is a hundred times more active in this process than rituximab. "For our deal with GSK this unique epitope was beneficial as well," says Van de Winkel. "A unique binding site can be patented which we did. No one else can target this site." Not an easy target, though. It took Genmab's scientists several years to make the antibody. "We will not have many competitors," smiles Van de Winkel.

Story of succes
Genmab is quickly expanding. The company occupies five floors in the Alexander Numan building on the Utrecht University campus with 130 employees and is looking for more space and people. One of the reasons for this expansion is the success of HuMax-CD20 for which a large deal with Glaxo Smith Kline was closed (see Conceptuur 51, June 2007). The market for therapeutic antibodies is the fastest growing sector within the pharmaceutical industry, says the CSO. This year, over twenty billion dollar sales will be generated, with four billion from HuMax-CD20's competitor Rituxan only. Jan van de Winkel is convinced of Genmabs success. "Just recently, people stopped asking me if this was going to be a success, and started asking me how big do I think this success is going to be. To me, that is a huge compliment."