Dextran microspheres release proteins where and when needed
Bastienne Wentzel
1 oktober 2007, Conceptuur
A drug delivery system based on a dextran hydrogel is on the virge of commercialization. Prof.  Wim Hennink incorporates therapeutic proteins into dextran-based microspheres. These proteins are released by diffusion and degradation of the hydrogel. Timing of release is crucial and can be precisely tuned. Hennink has been working on this new system since the early nineties. The pharmaceutical company Octoplus is now 'valorizing' it by taking it to the clinic. "Valorisation is the translation step needed to go from academic concept to industrial product."
Farmacie 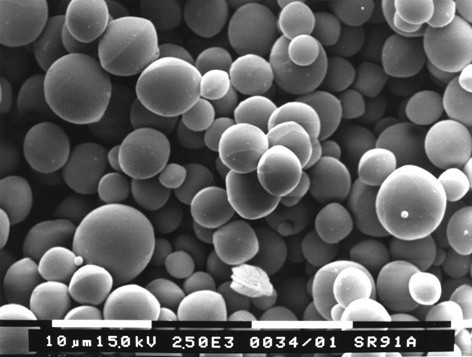 Despite having spent many years as a polymer scientist with TNO and with the chemical company Fasson in Leiden, Prof. dr. ir. Wim Hennink, professor of biopharmacy and pharmaceutical technology at Utrecht University is an academic scientist beyond doubt. His office is literally filled with PhD theses. During the interview one of his PhD students brings another one, the product of her own recently finished work. Yet Hennink has made the step from an academic concept to industrial application with his research on dextran-based delivery systems for therapeutic proteins. Hennink recalls: "In a very early stage of this research we applied for patents. In the late nineties we licenced these to Octoplus, which was a start-up pharmaceutical company at the time. They have been working hard on issues such as scale-up and GLP. It is a great example of the synergy between academia and industry."

The dextran hydrogel Henninks group investigates is meant for local delivery of therapeutic proteins such as an implant or subcutaneous or intramuscular injection. When Hennink started his research at Utrecht University in 1992, mainly polylactate was used. "Polylactate has several disadvantages such as a low hydrophilicity," explains Hennink. "Dextran is available in pharmaceutical purity grades, it is already used in the clinic as a plasma replacement so toxicity is not a problem. It is hydrophilic and we hoped that degradation of the network would be controllable. This proved indeed to be possible."

Dextran is a water-soluble polymer made up of sugar units. To create a hydrogel -a gel which swells in water- the sugar polymers must be crosslinked. Hennink started by chemically attaching a methacrylate side chain on some of the sugar units of the dextran polymer. The methacrylate groups couple in a radical polymerization reaction, in this way crosslinking the different polymer chains to form a gel. When the therapeutic protein is present during gel formation, it is locked inside the hydrogel. By coupling the methacrylate unit to the polymer via a carbonate ester spacer, the crosslinks can be easily broken by adding extra water to the network (such as in the body) thereby releasing the enclosed protein.

The speed with which the network breaks down depends on the amount of crosslinks, the type of methacrylate side chain and the initial amount of water in the gel. Hennink and co-workers showed that it is possible to tune the timing and speed of release of the enclosed therapeutic. "We can manipulate the degradation. We can make a gel which degrades within a day and one which starts to break down after 75 days. And these are not the limits," says Hennink.

Cigarettes and ping-pong balls
The therapeutic proteins can be enclosed in a continuous gel (gelated for example in a syringe so that the product looks like a cigarette) or in microspheres which are suitable for injection. The latter are created by polymerizing the modified dextran in an aqueous two-phase system containing polyethylene glycol (PEG) spheres. By stirring, a water-in-water emulsion is created whereby the non-crosslinked dextran polymer forms spheres in the aqueous PEG phase. Radical polymerization in the presence of protein fixates this structure and gives stable dextran 'ping-pong-balls' with protein inside.

"We have demonstrated that the protein is entrapped in the microspheres," claims Hennink. "Release of the protein by diffusion out of a macroscopic gel is slow as we saw earlier. But diffusion over a short distance such as out of the spheres is an extremely efficient process. The protein would be released within hours. On the contrary, we observe release only after a period of days. This means the polymer  spheres must break down for the release of the protein." The controlled release was shown in mice which were given the growth hormone hgH enclosed in dextran microspheres. The in vitro observed release of protein correlated exactly with the continuous growth of the mice that had been administered the microspheres containing hgH. "This shows not only that the protein is released in vivo in a way we can predict in vitro but also, and this is important: the protein is still biologically active after having stirred, freeze-dried, and mixed it."

By mixing spheres with different release times, pulsed release can be obtained, says Hennink. "This can be useful for vaccination. For example in child vaccinations, you want release after a month, after six months and after a year. By choosing a combination of microspheres enclosing the vaccine, this pulsed release should in theory be possible with a single shot vaccination. In a TI Pharma project we are investigating this possibility."

Physical network
"The chemically crosslinked dextran is a beautiful system," says Hennink, "but a drawback is the need for a radical polymerization. We investigated possibilities for gel formation based on physical interactions. This is a second generation dextran hydrogels." One of the possibilities Hennink investigated was coupling of chiral oligolactic acid side chains to the dextran polymer. The two stereo-isomers (each others mirror images) are compatible and they self-assemble to form a complex when mixed. As side-chains of the dextran polymer, the self-assembled oligolactate units act as crosslinks. In this way, a hydrogel is formed similar to the chemically crosslinked methacrylate-dextran gel. "Only mixing of the dextran polymer with the different lactate side chains is needed in water at pH 7 at room temperature. This is a very protein-friendly process." Again, the researchers showed that the network slowly breaks down and releases protein over time.

The first generation dextran hydrogels is now marketed by Octoplus under the name of OctoDEX. Studies on mice with microspheres loaded with rhIL-2, a cytokine that can be used for cancer treatment, were successful, says Octoplus on their website. Hennink  however, refuses to 'sell' his product in comparison with others. "Dextran is not the end. We are looking at new systems but these investigations are commercially sensitive. Dextran is better than its competitor PEG because it is even more polar. It has more hydroxyl groups available for chemical modification. It is extremely water-soluble and very compatible with proteins. But I am not a car salesman who says my product is the best. I am mainly interested in the academic concept."