Let food be thy medicine
Bastienne Wentzel
1 september 2006, Conceptuur
"Two-thirds of all medicine has a background in food. Research at the interface between food and pharma is important," says Dr. Johan Garssen. In a strategic alliance between Numico Research and the UIPS in Utrecht he investigates the influence of certain oligosaccharides in breast milk on the immune system. These sugars act as prebiotics and in one trial reduced the incidence of allergy in babies by half. "This group of oligosaccharides is capable of much more than we ever imagined." 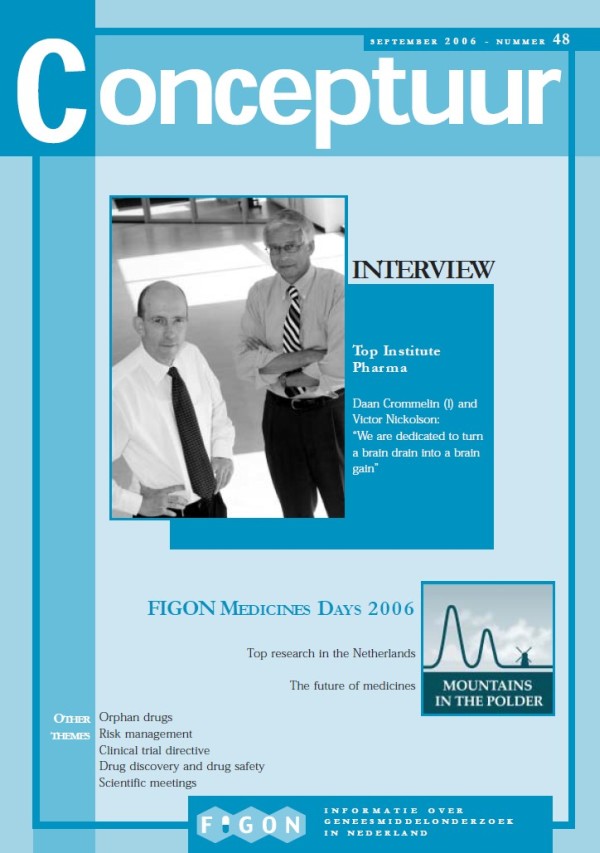 Dr. Johan Garssen has the perfect combination of two jobs. Half his time he spends at the Utrecht Institute of Pharmaceutical Sciences (UIPS) where he leads a group of researchers working on immunopharmacology. At Numico Research in Wageningen, Garssen is the head of  the Immunology department, searching for a.o. sugars and bacteria with an influence on the immune system. This combination reflects Garssens message to the world of pharmacy and pharmacology: "Research at the interface of food and pharma, at the interface of  academia and industry, is gaining importance," he says.

Golden Standard
Two-thirds of all medicine has a background in food, knows Garssen. Aspirin was used by the Egyptians as a tea-like brew, thus as foodstuff. Thousands of years later it is arguably the most common medicine in the world. Garssen wants to show that the food of all foods, breast milk, may have unprecedented medicinal effects. "Breast milk is the Golden Standard for infant nutrition. Many components found in breastmilk are essential for the development of the immune system. As an immunologist, this is what interests me," Garssen says.

Breast milk contains a group of unique oligosaccharides. Most of these are not found in cow's milk. In breast milk, the mixture is composed of 90% of the shorter galacto-oligosaccharides and 10% of the longer FOS (fructo-oligosaccharides) chains. Garssen investigated the composition together with Bernd Stahl and Günther Böehm at Numico-research in Friedrichsdorf. They found correlations between the amount of oligosaccharides in the milk of a particular mother, and the severity of allergy in her child. However, this was an epidemiological research approach (associations), and not a causal effect type of analysis, says Garssen. The mixture of oligosaccharides was analyzed by mass spectrometry, HPLC and other techniques and used for further investigations.

The researchers showed that the unique oligosaccharide mixture indeed modulated the immune system. The researchers have shown that the mixture acts as a prebiotic earlier. "This means that the sugars are the food of the good bacteria of our gut flora," Garssen explains. "This group of oligosaccharides is capable of much more than we ever imagined."

The effect is not entirely unexpected, says Garssen. Cells of the immune system recognize sugars at the membranes of pathogens also. Prof. Yvette van Kooyk at the VUMC has found that particular sugars have an affect on immune cells also. "These were the same oligosaccharides as found in breast milk," says Garssen. "Although the effect of sugars on the immune system was known for some time, it is only now that we realise that this may have consequences and applications."

Immune response
The International Life Sciences Institute has compiled a set of experiments recommended to prove the effect of a foodstuff on the immune system. One of these is a vaccination model in animals. Garssen and his group at Numico and at UIPS have conducted these experiments in mice. One group of animals is given a diet of oligosaccharides, the other group of animals was given a placebo diet. Subsequently they are provided with a pathogen or as an alternative a vaccine. Immunological effects such as DTH response and ex-vivo lymphocyte stimulation are measured.  The conclusions were convincing; oligosaccharides seem to stimulate the cellular immune response. More interestingly especially Th1 mediated immune responses seem to be stimulated. In other words the oligosaccharides suppress the level of  Th2 activity in favor of Th1 cells.

The results were encouraging enough to start two large clinical trials in Italy on about 250 children. In one of these double blind studies, young children with an enhanced risk of allergy were given a mixture of oligosaccharides or a placebo. A number of immunological parameters were measured over time, for example gut flora and IgE which plays a role in allergy. The result was a significantly reduced incidence of atopic dermatitis.

Garssen is delighted with these results: "It is amazing that half of these children with a high risk of atopic dermatitis did not fall ill. The whole path from molecule to clinical study was done. That is something to be proud of." But as an immunologist, he wants to know what really happens in the cell. "We still do not know why the immune response is affected," says Garssen. "We want to prove that the oligosaccharides actually modify the immune system and influence the regulating T cells. We are looking at the interaction between antigen presenting cells and T-cells. But it will take some time before we know for sure."

Surely the oligosaccharides which Garssen investigates will sooner or later end up in Numico's baby food products. "Numico's motto is to do everything in their power to make babyfood as close as possible to breast milk," says Garssen. Additionally, the knowledge may be used to develop medicinal foods. "Food is not a medicine but it can come close."

TIP avant la lettre
Garssen stood at the cradle of the collaboration between academia and industry that facilitated this research. At the time Garssen, who was already working with Numico Research, accepted his position at the UIPS, Numico started to realize that innovation of products is best done with academic input. A strategic alliance between Numico and Utrecht University was the result. "I want this to be an example of a cooperation between industry and academics. I want to show that it works; it is nothing to be scared of. On the contrary, it has given us a lot of benefit," feels Garssen. "In the US this has been going on for years. In the Netherlands we have our reservations. It takes some time getting used to. I think what we do in Utrecht and Wageningen shows that it works very well."

He sees the strategic alliance as 'Top Institute Pharma avant la lettre'. "We perform translational research, which is the leading thread running through TIP." Garssen is involved in some of the first projects financed by the top institute. "If TIP did not exist, the alliance would still continue. But by means of the top institute, we can make our programmes even larger. For example the Toll-like receptor programme, to investigate the role of these receptors on the regulation of the immune response, is so large it is almost a Dutch platform in that area. The universities of Leiden, Utrecht, Nijmegen, researchers from Organon, Numico are all involved. This will be one of the first TIP projects to start."