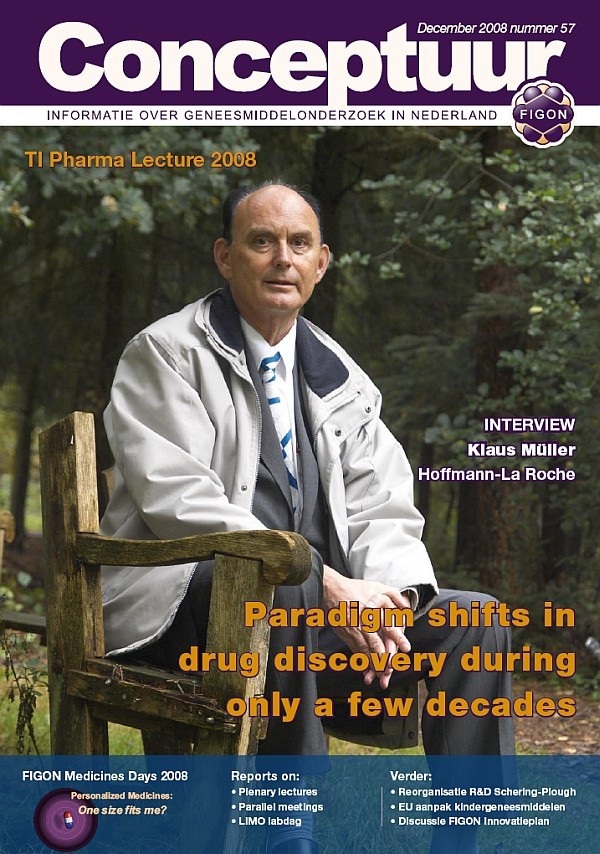 "Cancer patients have always received personalized treatment," says Jos Beijnen, pharmacist of the Slotervaartziekenhuis and the Antoni van Leeuwenhoek Ziekenhuis in Amsterdam. "After all, surgeons only operate at the tumor site. Radiotherapists only irradiate target places after careful localization and chemotherapy is only given to patients with chemosensitive tumors and in a dose based on patient characteristics. These include body surface or weight, hepatic or renal function and genetics."
But new developments and discoveries make new steps in treatment individualization possible. New agents are being developed in this area. The introduction of Gleevec or imatinib, was a landmark. Time magazine in 2001 staged Gleevec on the cover as bullets in the war against cancer. Personalized medicine was then defined as "pharmacotherapy that precisely targets the specific molecular defects of the cancer cells of the individual patient."
"Following this concept, several drugs, both monoclonal antibodies and small molecules have been developed in recent years," Beijnen says. "Undoubtedly, trastuzumab is the most successful example of these new drugs. It has a major impact on breast cancer treatment nowadays."

Overexpression targeted
About one quarter of breast cancer patients show overexpression of the HER2 receptor. This overexpression is associated with a bad prognosis. Trastuzumab blocks the HER2 receptor. The mortality in patients with HER2-positive breast cancer is reduced and recurrence rate decreases with 50%. But, patients who do not overexpress HER2 do not benefit from trastuzumab. "Therefore, selection of patients based on HER2 status is extremely important," says Beijnen. "This is one of the most appealing examples of personalized medicine in oncology."
A second example is erlotinib. In 40-80% of lung cancers, EGFR is overexpressed. Erlotinib inhibits mutated EGF receptors. Again, a selection of patients with mutated and  overexpressed EGFR  increased response likelihood. "Clearly, the effects of patient selection on trial outcomes are enormous," says Beijnen. "Only including patients with the right targets in trials may dramatically influence the future of the investigated drug."

Challenges
Therefore, pharmacotherapy that targets specific molecular defects of the cancer cell may be an attractive approach as it selects patients who may benefit from treatment and, equally important, it prevents treatment for those who will not respond and may even experience toxicity. "But the reality is also that not all patients respond to, for example, trastuzumab. Also, resistance may develop within one year," warns Beijnen. Mechanisms are not always clear yet.
A second challenge is selectivity. "We have to realise that in particular for targeted overexpressed receptors we may be confronted with toxic effects from blocking these receptors in other tissues. Some patients may therefore experience cardiac toxicity from trastuzumab or skin toxicity from erlotinib."
Finally, precise chemotherapy may show limited efficacy in a multifactorial disease. "Best results are often seen in relatively rare tumors, usually single cellular defects. Most tumors are, however, very heterogeneous. Cancer is, above all, a multifactorial disease. Therefore, precise chemotherapy is possibly not effective in many cancers. Research is now directed at combination therapies and the design of multi-targeted agents such as sunitinib or sorafenib."
Novel targeted personalized therapies with monoclonal antibodies such as trastuzumab or rituximab are successful, says Beijnen. Novel targeted (personalized) therapies with small molecules are most successful so far, however, in single defect, rare cancers.  Beijnen concludes: "Despite the challenges including resistance, toxicity and the need for multi-targeted treatment, I believe that in oncology personalized medicine will remain the mainstay for further treatment development."