Dutch genomics research in good position to prosper
Bastienne Wentzel
1 augustus 2006, IOP
Prof. Dr. Arjen van Tunen stood at the cradle of the IOP Genomics programme at the dawn of the new millenium.  It was the first national Genomics research programme starting in the Netherlands. Van Tunen is content with the development of IOP Genomics since then, but urges the authorities to let go of traditional divisions: "THE industry and THE universities do not exist," van Tunen says. "Knowledge providers such as Keygene are in between. They should be acknowledged better for their merits and opportunities." 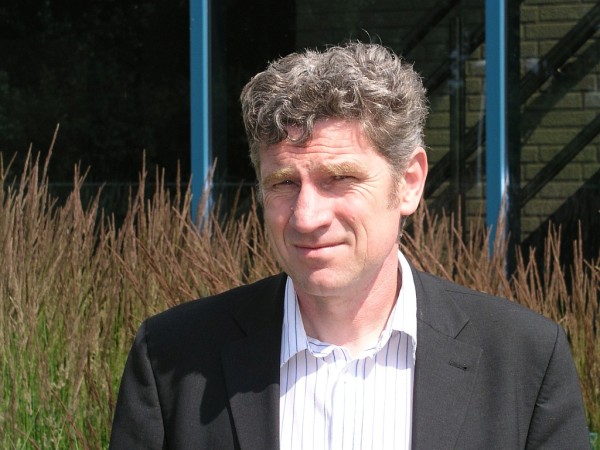 The modern, air-conditioned building of Keygene NV, situated at the Food Valley industrial complex in Wageningen, feels like a perfect place to work on this warm summer day. The company provides genetic and genomic contract research for their stakeholders mostly in the area of seed improvement. "People like to work here," says Prof. Dr. Arjen van Tunen, CEO and Director Upstream Research of Keygene, "and they make a good living. But we have trouble finding new students and employees. It is not so sexy to work in seeds." Even so, the Netherlands is number one worldwide in the seed improvement sector. Ten thousand people work in this sector that Van Tunen characterizes as very innovative. "A number of innovation shave been developed, such as biomarker assisted breeding."

At the end of the last millennium, however, the Netherlands was in danger of missing the bus, noticed Van Tunen, then Director Research of Plant Research International. The US was rapidly developing in the field of genomics, plant and bacterial genetic material was sequenced and the human genome was elucidated. Also European countries such as France and Great Britain were investing in genomics. "We found that the Netherlands was lagging behind. Not only from our point of view in the agro and food business. Also from the biomedical point of view."

Opportunities
A group of people including Van Tunen therefore sent a statement to the Dutch Ministry of Economic Affairs, the so-called  Strategisch Actieplan Genomics. The message was clear: the Netherlands is missing some important opportunities. "It was a unique situation where the entire field, including the agro and food sector and the medical sector organized itself," van Tunen recalls. In the mean time, some other programmes were already started, based on grants, including the NWO genomics and bioinformatics, and the Senter Novem IOP Genomics programme.

An important issue at the start of the IOP Genomics programme was the focussing of the research themes. "We wanted to avoid financing bits and pieces of everything. Genomics research requires large investments. Sequencing the humane genome called for a cooperation between large research groups and a large sequencing facilities. We therefore needed IOP projects of substantial sizes, one to two million euros each, to obtain the necessary critical mass. Programme manager Marcel de Groot and IOP Genomics chairman Theo Verrips played a major role in this process,"  van Tunen explains. Four themes were eventually formulated; health, food, biomolecular processes and genomics technology.

In the course of years the IOP programme was running, many new fields came up. After genome sequencing, microarrays were hot, then proteomics, bioinformatics, now it is metabolomics and systems biology. "New trends are important and you need to remain flexible," van Tunen points out, "But the IOP should not go with every new hype. Don't forget that within the existing areas there is still a lot to do."

The IOP programme is based on involvement of companies in the projects that research groups enter. "Companies should be selective in their choice of projects they will support," van Tunen says. "They should only be involved in areas where they see opportunities, and at the same time make sure that their interests are attended to in the programme. Universities, on the other hand, should insist that companies are really involved and deliver what is promised."

Knowledge provider
One of the main technologies Keygene exploits encompasses a DNA fingerprinting technique for crops which can identify properties such as taste, scent or resistance at the DNA level. The patents on these techniques and the resulting innovations are the 'products' the company makes, van Tunen says. "We are a knowledge provider. In fact, our activities often very much resemble the type of work of academic research groups. We have a post-doctoral programme, for example. Traditionally, society recognizes universities on the one hand and companies on the other. But in real life, it is not that simple. Small companies such as Keygene are conveniently located under SME's (Small and Medium Enterprises). But the grocery store around the corner, also being an SME, is an entirely different type of business compared to ours."

Van Tunen feels that there is not enough attention for knowledge providers such as Keygene in the Netherlands. "We sometimes fall in between things. We are not a traditional SME because we do not produce something tangible, but we are not a university either. As a result, financial support is poorly targeted to knowledge providers, even though many of these are in need of capital and financial support. I would be happy to see that knowledge providers which are companies can also apply for a project in programmes such as the IOP Genomics. If innovative research is subsidized by the government, why not include knowledge providers such as Keygene? We create value which indeed eventually ends up in stocks. But in the end, all of society will benefit from our work. We need to let go of the traditional division between THE industry and THE universities," van Tunen argues.

Internationalisation
Also, van Tunen feels that continuing the existing programmes such as the IOP Genomics and NWO Genomics in a second phase of the National Genomics Initiative is important. "We have invested in these programmes for the last five years. We now start to reap what we have sown. The first phase of the National Genomics Initiative is coming to an end. The results from these programmes should land in companies or patents. We should not let it dry out."

Finally, internationalisation is an important goal, says van Tunen, not only to compete with the US, but also with new players in biotechnology such as China and Taiwan. What are Europe's strengths? Van Tunen: "Patents are our best bet, because they are a reflection of our creativity coupled to our technological capabilities. Tradition and creativity are important values in Europe. Organisations representing, guarding and stimulating our rich science tradition such as KNAW and NWO should be cherished. Tradition, such as for instance the beautiful old buildings of the University of Amsterdam can be used as a source of inspiration. The diversity of cultures in Europe can also be used for inspiration, if organized well. Also, we are capable of spending our money well in Europe. We look for opportunities and protect and continue these effectively. With all these developments and sources for creativity and inspiration combined with substantial financial support from the government and industry I feel that Biotechnology and Genomics in the Netherlands is in a fine position to further develop and prosper."