Truly a win-win project
Bastienne Wentzel
1 mei 2005, IOP
As one of two groups in the world scientists at the Hubrecht Laboratory succeeded to develop rat knock-outs. "What these people in Utrecht have done is very special," says Ruud Tegelenbosch of Noldus Information Technology, member of the industrial user group. "These animal models are very valuable in understanding gene functions in human health and disease and may also be useful for drug design and testing."
Farmacie 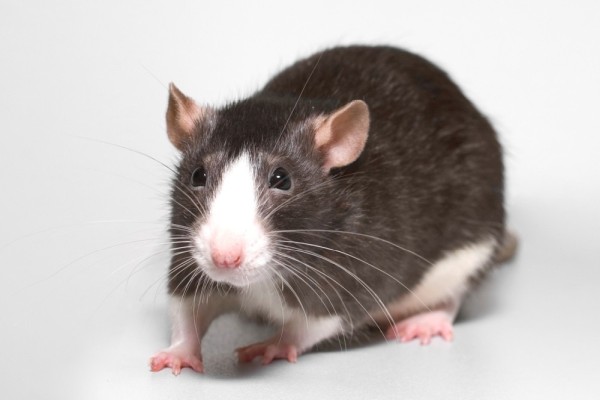 The rat is a very important animal model in biomedical research, especially in areas such as reproductive physiology and cognitive neurosciences. With the growing awareness that most neuropsychiatric disorders have an important genetic component, understanding of gene functions is very useful. To unravel functional genomics, so called knock-out animal models are needed in which specific genes have been disabled. These knock-out techniques have been well established in mice, but proved to be difficult to accomplish in rats. At the Hubrecht Laboratory in Utrecht, the group of Dr. Edwin Cuppen, project leader of the IOP Functional genome analysis in rat models has found a method to knock out rat genes. Worldwide only eight rat knock-outs have been made, of which six in Utrecht.

Turn around
The basis for the current technology was established at the Hubrecht Laboratory using C. elegans and zebrafish. For the knock-out rats, however, the usual forward genetics required a 180-degree turn in the thought process. Normally a gene is damaged with a chemical. The animals which show a defect are then studied to find out which gene caused the defect. Cuppen turns this around by applying target-selected mutagenesis. Male rats are mutagenised and then checked for mutations in a gene selected in advance. If that specific gene is inactivated by an induced mutation in a specific rat, the animal will be used to breed and produce more animals with the same defect: the knock-outs. This process is called reversed genetics.
Once the knock-out procedure was accomplished, Noldus Information Technology in Wageningen got word of it via Prof. Dr. Lex Cools of the Radboud University of Nijmegen. This neuroscience research group focuses on genes that influence the occurrence of, for example, Parkinson's disease or schizophrenia and participates in the same IOP. Noldus develops special software and professional instrumentation for the collection and analysis of behavioural data. Their PhenoLab is a very advanced video-based observation system for continuous, automated tracking and analysis of mouse behaviour in an interactive home cage environment. The system is particularly useful for (high throughput screening) of behavioral phenotypes. Cuppen explains why Noldus fits perfectly in the IOP: "We now have the proof of principle for the rat knock-out. The next step is full characterization of these rats. This is difficult and depends on the model, the method, the laboratory and the researcher. The apparatus and software packages of Noldus are very useful to automate and standardize these procedures."

Mutual profit
The PhenoLab was designed for mice, the most common laboratory animal. "We would not yet have thought to develop a similar system for the rat if the people from the university had not asked us. That is a great advantage of being an industrial partner in an IOP project. We hear what scientists want and in this manner we can adjust our product development strategies", says Ruud Tegelenbosch. On the other hand, Cuppen explains how scientists take advantage from the industrial partners: "Right from the beginning we could make use of the expertise of Organon and Solvay, both  belonging  to the industrial user group. We need access to a large number of mutagenised rats over a longer period. Rats do not live forever and additionally, it is very costly to keep breeding them. So we are interested in freezing the sperm of mutagenised males and to create offspring when needed. Organon has great expertise in reproduction, cryopreservation and in vitro fertilisation."
Now, the generated knowledge within the IOP may be the base for spin-offs. For instance, the idea has been born to make  a knock-out library for identification and characterization of knock-out genes, using a high throughput set-up. Such a library will provide for the needs of pharmaceutical companies to achieve well defined knock-out rats. The set-up of a Rat Phenotyping Center is another initiative which is enthusiastically discussed among the IOP partners.

Follow up
Cuppen is very clear about the advantages of the IOP program. "Right from the start the expertise and money is available. This research is 'money-intensive', it requires large capital assets for investment in apparatus. We shouldn't be averse to this. With funding from other sources we would not have been able to achieve what we did."
Also Tegelenbosch sees great advantage in the IOP cooperation. "As an innovative company, we can not be close enough to the research. The scientists supply input for our product developing strategy. In return, the scientists learn what is possible or impossible in product innovation. This cooperation is truly a win-win situation."
But not all is well. The request for follow-up funding from SenterNovem has been turned down. Also a request for funding from the FP6 program of the European Union is dishonored. Cuppen: "In the Netherlands, it is very difficult to get a follow-up funding. The IOP is nearly finished, but our research on reverse genetics in rats is not. We created a wonderful technology and we see great challenges to continue our research. In addition, such approach is necessary for further valorisation of knowledge. In the USA, good results are appreciated with a renewal. Here, you are on your own."
Industry and scientists should be inventive in finding money for follow up projects. Nevertheless, both
Cuppen and Tegelenbosch advise research groups and companies to participate in innovative cooperations such as the IOP. Tegelenbosch: "It is the best way to decide what the priorities are in innovative developments. Keep involved. Avoid doing things that nobody is waiting for. If you are not talking to scientists, you miss the trends." Cuppen: "The combination of non-related expertise is a huge advantage of the IOP. Think big!"

Noldus Information Technology
When Lucas Noldus received his PhD in 1989, he had a basic software package in his hands which he had developed for collecting and analyzing  behavioural data of ichneumon flies during his study. He professionalized the package, renamed it The Observer, and founded the Noldus Information Technology company. Nowadays, about 75 people worldwide are employed by the company with its main office based in  Wageningen where R&D, Sales, Marketing and Order handling take place. The company is represented with offices in Germany, Spain, France and the USA while there are distributions centers in Asia.
Soon after the start, The Observer was expanded to a professional system suitable to record activities, postures, movements, positions, facial expressions, social interactions or any other aspect of human or animal behaviour. Next, EthoVision, a video tracking system for automatic recording of movement, behavior and social interactions between animals was developed. The system improves the quality and productivity of behavioral tests with laboratory animals.
The newest development was presented at the end of 2004. PhenoLab is a video-based observation system for continuous, automated tracking and analysis of mouse behaviour in an interactive home cage environment. offers a solution to The system offers a solution to the shortcomings of conventional testing, by providing automated observation of mouse behavior in a low-stress environment where long-term patterns of behavior are taken into account. Another project in which Noldus is one of the two commercial partners and wherein ten scientific groups participate has been granted by Bsik. This so called Neuro Bsik project is aimed to develop a high-throughput PhenoLab system for phenotyping knock-out mice.
Currently, Noldus is developing a new PhenoLab version that will be suitable for behavioural studies in rats. This has become a spin-off of the IOP project. A prototype of the rat-cage is now being tested by the research group of Dr. B. Ellenbroek of the Radboud University of Nijmegen. For this project Noldus has been granted funding by IAP  (a Gelderland funding agency for promotion of regional innovative research). The Nijmegen research group as well as a second company Telemetronics Biometry BV, participate in the IAP project. Recently another consortium was founded and a new project proposal was submitted.  Ruud Tegelenbosch is very happy with all these new initiatives and promising projects. "Cooperation with scientific research groups has proven to be Noldus life-blood. We already reap the fruits of IOP, IAP and Neuro Bsik and we are very hopeful that new projects will be granted in the near future."

This article was published as an IOP Genomics factsheet