Cell wall dynamics of Aspergillus Niger
Bastienne Wentzel
1 maart 2009, IOP
Aspergillus niger, well known as the fungus that produces black mold on old bread, forms an extended network of interconnected hyphae. This mycelium has an enormous capacity to secrete proteins and other compounds. Its productivity has led the food and pharmaceutical industry to use A. niger  as the preferred biological production factories for, among others, enzymes. New information about genetic signalling in the fungus cells has urged Marc van der Maarel to study the dynamics of the A. niger mycelium in more detail.
Lifesciences Farmacie 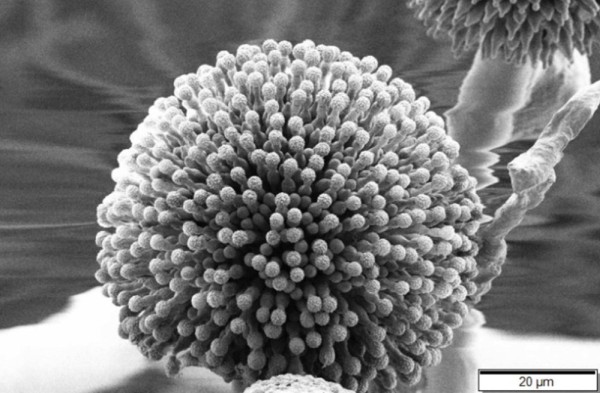 The importance of fungi as biological production factories is well known. Most of the worlds antibiotics are produced by fungi. They produce enzymes, for example to digest starch, but also metabolites. Aspergillus niger is one of the most well defined industrial fungi. It is a producer of citric acid, an acidity regulator in food. But it can also efficiently produce enzymes, in some cases more than 100 grams per liter biomass in a fermentor.
Although well known, even A. niger is not completely understood. Marc van der Maarel, professor of carbohydrate bioprocessing at the Groningen University, found in a former IOP Genomics project that about a quarter of the amylase-type enzymes do not migrate out of the cells. I believe that these enzymes must have a function not only outside the cell but in the cells physiology, for example in the formation or degradation of carbohydrates within the cell, Van der Maarel explains. To find out, he started the new project DynaMyc from dynamics of the mycelium.

Dynamics
The three academic partners involved in DynaMyc each have their own specialty. The Department of Microbiology of the University of Utrecht studies processes within the mycelium, the tentacles of the fungus that produce the enzymes. Han Wösten and Jerre van Veluw use a new technique for cutting a small particular segment of the mycelium and transferring it into a container for further study. They are also able to characterise enzymes with the use of fluorescent labels, Van der Maarel explains. Here in Groningen Jolanda van Munster and me use their information to produce and characterise enzymes. That sounds easier than it is. These enzymes convert hardly available substrates. We have now identified five potentially interesting enzymes which we will study in more detail.
The Molecular Microbiology group within the Institute of Biology at Leiden University studies the ageing of fungus cultures. When the mycelium ages, the cells lyse (die) and production capacity is lost. Benjamin Nitsche and Arthur Ram deliberately create an old mycelium and sample the cells over time. By analysing the RNA of the cells on a microarray, the expression of genes during ageing is studied. This also sounds easier than it is. You have to realise that not a lot is known about these processes. We are learning by doing as we go along, says Van der Maarel.

Improving productivity
By collecting more information on the action of the enzyme and protein network involved in the formation and break-down of the fungal cell wall, the production process may be improved, says Van der Maarel. Countries like China are increasingly important competitors in producing enzymes and metabolites. To sustain our economical competitivity, industry needs to improve the production process. By understanding the ageing process and the autolysis of cells, it may also be possible to improve the production of the cells. When cells lyse, you lose biomass, explains Van der Maarel. These cells do not produce anymore. By preventing or postponing autolysis, you can produce more with the same amount of biomass in the same fermentor, explains van der Maarel.
Improving the production will be the direct result of the project, says Van der Maarel. But in the more distant future, the fundamental understanding of the actions of enzymes and proteins involved in cell wall synthesis and breakdown in fungi may lead to more advanced applications. Lysis-on-command is one of these. Van der Maarel explains: When you understand how enzymes break down the cell from the inside, which triggers start the cascade, you may be able to regulate that process. That means that you may be able to prevent the process from happening or to add a compound which induces lysis of the cells. The latter is useful when one of the enzymes that do not migrate out of the cells prove to be interesting compounds for industry and need to be produced on a larger scale.

Knowledge network
Finally, the maintenance of a knowledge network on fungi is an important result of this cooperation, says Van der Maarel. DSM Food Specialties under the supervision of Hein Stam bring in knowledge on proteomics, bioinformatics and pilot plant fermentation. Marco de Boer and Ruud Veelo of Kerry add specific chemical analysis and the use of lab-scale fermentors to this. De Boer hopes their joined efforts will lead to an improved production process and a cell line which produces enzymes ten to twenty percent more efficient. All knowledge we can gather about the fungi is welcome, he says. Besides this economic motive, De Boer also feels a strong knowledge network with the university is an important reason to participate. We feel we can get more out of the project if we actively cooperate. It is relatively easy to give some money and wait for results. But I personally think our way of working will give more return on our investment.

Consortium
Instead of the usual industrial user group, the five partners in the DynaMyc project have formed a consortium. The difference is that the two industrial partners, DSM and Kerry, deliver their share of money and time, 1 and 0,3 fte respectively. When Marc van der Maarel had an idea for the succession of the first IOP-Genomics Aspergillus project, he talked to DSM and the University of Leiden first. The university of Utrecht quickly was involved and together they decided to ask Kerry in the project. Van der Maarel urged DSM and Kerry to reach consent about possible IP problems before signing the consortium agreement, which was signed after less than a year of negotiations. The interaction with industry is much more intense. This works very well, also for the students who learn about the ways industry works, Van der Maarel says.