Computational chemist with a practical mind
Bastienne Wentzel
16 april 2018, Diversen  [»]
Herma Cuppen was recently appointed professor in the field of Computational Chemistry at IMM. She studies how individual molecules and atoms behave inside a solid such as a crystal, by calculating how they move and stack. The knowledge she creates has extremely diverse implications, ranging from the formation of the building blocks of life in space, to the properties of medicines.
Chemie 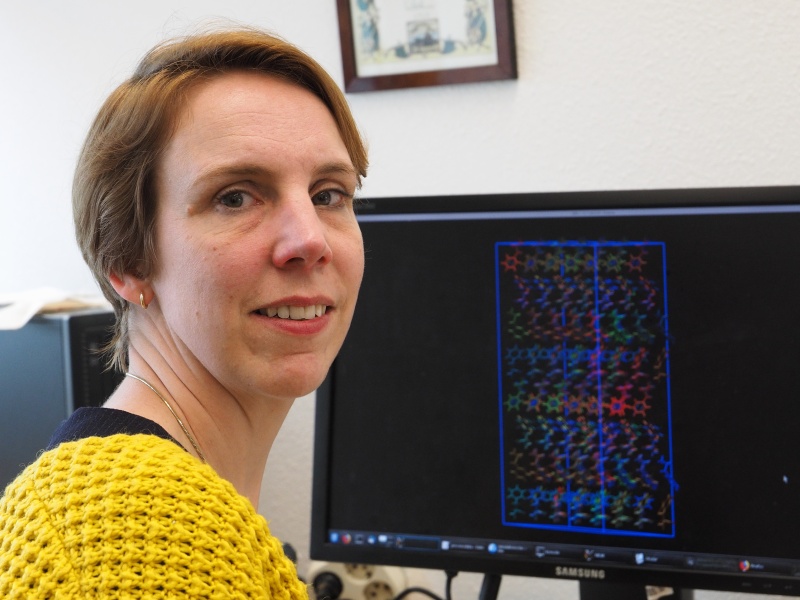 The image that one may have of a computational scientist is true, Herma Cuppen admits. “I literally spend most of my day behind my computer,” says the new professor. But, she is quick to add that she always looks for a connection with the real world. “Some people in computational science will calculate anything just because they can. I always look for interaction with other disciplines. We may be able to answer their questions, and they shine new light on ours.”
As early as during her PhD research, which she performed from 2000 to 2004 within the IMM in the Solid State Chemistry group with prof. Elias Vlieg, Herma looked for practical applications. She studied the molecules of, among others, the painkiller paracetamol and the sweetener aspartame, by calculating how they stack to form a crystal and predicting the shape of these crystals. “For the pharmaceutical or food industry, crystals that look like needles or plates are inconvenient because they clog up filters. Understanding how different crystal shapes are formed is therefore valuable,” Herma explains. Her PhD thesis was rewarded with the ‘Kristalgroeiprijs’ for excellent research.

Two body problem
Despite her early success, Herma has never had a predetermined plan for a scientific career. “After my PhD research in Nijmegen, I was not entirely sure what to do. My husband finished his PhD in Theoretical Chemistry during the same period, and we decided to look for postdoc positions together in the United States. He got a job offer at the Ohio State University with professor Anne McCoy. She was a great help in fixing the ‘two body problem’, which is something many science couples will recognize. If one finds a job away from home, what will the other do? Anne helped me find a position in astrochemistry research which involved computer simulations of surfaces. As they had no experience with this, and I did, I was the perfect fit for the job.”
Herma and her husband spent two years in the US and returned to the Netherlands in 2006. She successfully applied for a VENI grant for a postdoc position at the Leiden Observatory, where she continued to work on simulations of molecules in space. “Their work is mainly based on experiments. I could add my knowledge on calculations, to see if we could explain what was happening. But I could also offer a different perspective on the experiments. For example, I proposed to execute an experiment where ice was grown while simultaneously bombarded with molecules. It turned out to give us more control and insight in the outcome of the experiment. I actually performed the experiment myself, which proves I am not only sitting behind my computer all the time!” Herma has positive memories of that period. “It was very interdisciplinary research, diverse and instructive.”

Now or never
During the last of four years in Leiden, Herma decided to focus on the future. “In 2010, I wrote many proposals for funding, including a VIDI and an ERC Starting grant. I never expected to get them both, but I did. This was enough to return to the IMM in Nijmegen and start my own group as an assistant professor (UD) in the Theoretical Chemistry group of professor Gerrit Groenenboom. Had I not received any grants, I may have switched careers, for example to the pharmaceutical industry,” she says. “But I am happy to be here. I really enjoy the collaborative atmosphere between chemists and physicists. This is a good place for my research.”
With the grants, Herma employed several PhD students and a postdoc and built a solid group within the IMM over the next couple of years. The appointment as a professor this year was a natural next step. Additionally, the awarding of the Westerdijk Talent award, an NWO grant to stimulate the appointment of more female professors, has helped her. Herma appreciates the stimulation, she says, but: “I wish such a stimulation would not be necessary anymore.” The gender committee of which Herma is a member, is therefore aiming to take measures that benefit not only women, she says. “An example is a mentoring system for all PhD students, male and female. This will benefit female students who feel overwhelmed in the predominantly male scientific world, but will also help other students who need guidance.“

Jumping crystals and the origins of life
The research topics Herma chose for her group reflect the two topics that played a major role in her own scientifc career: the transition of crystals from organic compounds from one structure to the other and the formation and evolution of interstellar ices.
Asked to explain the first one, Herma jumps up excitedly to show a movie clip in which a needle shaped crystal suddenly jolts away. “These are the famous jumping crystals. When these are heated up, they undergo a phase change, which means the molecules in the crystal are rearranged. This causes the jump. But we don’t know exactly how the rearrangement takes place. Using calculations, I may be able to help solve this problem,” she explains. Jumping crystals may be used as actuators; small moving parts in electronics or machines.
Herma’s interests in astrochemistry are also continued. “We know that different molecules can form on interstellar ice that is present in the space between stars. These molecules play a role in star and planet formation. But the processes are extremely difficult to study, mostly because space is extremely empty and processes may take millions of years. Using computational methods, we can speed up the processes.”
To make the connection with practical applications, cooperation is vital, emphasizes Herma again. The structure and physical organization of many disciplines within the IMM, for example in the three main themes, is a great advantage, emphasizes Herma. “My colleagues are physically close, I literally run into them daily. This makes cooperation a lot easier.”