The Naked Pilot - Can Ergin
Bastienne Wentzel
1 oktober 2018, Cross Country magazine  [»]
"I am a nuclear engineer originally from Izmir, Turkey. During my study in Ankara there was a paragliding club where I learned to fly in 1999. It started as a hobby next to my study but soon I was addicted. I got my license and became an instructor. In 2007 I started as a professional tandem pilot at Sky Sports in Ölüdeniz. I also moved to Fethiye."
Paragliding 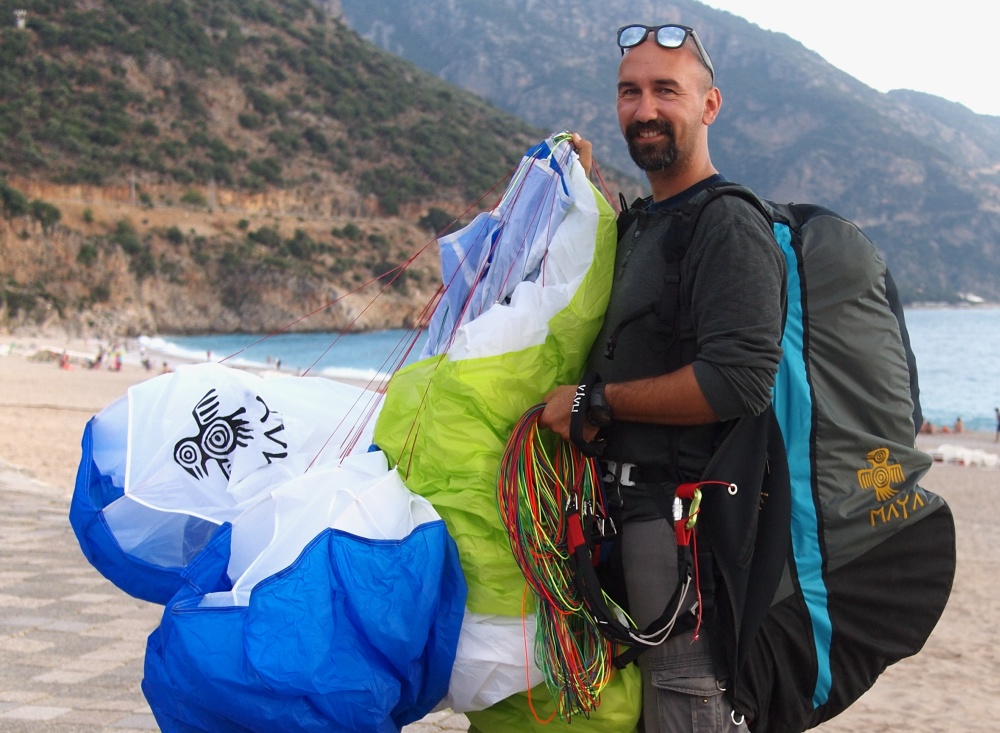 "In 2012 I founded Maya paragliders. Maya is both a beautiful Turkish girl's name and a reference to the Mayan Indians. Their culture has many similarities with the Turkish culture and the Maya have always been innovative.

As a nuclear physics student, I used fluid dynamics software, which simulates the behaviour of turbines. The blades of a turbine have a shape that looks like a wing. Therefore, the software is also suitable for simulating an aerofoil such as a paraglider wing. For my graduation project at the university I proposed to use this software to design a paraglider, and so it happened.

As I became a professional tandem pilot after graduation, the idea to design paragliders myself stayed in the back of my head. Five years later, I decided to finally execute the idea and start a company for manufacturing paragliders and equipment. Remarkably, in Turkey there is no paraglider manufacturer while there are around 20,000 pilots. I thought: if I don’t try it, the idea will always stay in my head and I will never know if I would succeed. So I just started.

In 2014 my first prototype was ready. It was made in Thailand, at the same workshop where SupAir, Skywalk and other big brands have their gliders produced. The day I got to fly the prototype was very exciting. Will it fly? Fortunately, it flew. It still had a bit too much brake pressure and was not so agile, but it was a start.

I now have four gliders at Maya: a school glider Haydi (that means 'come on, let’s go’ in Turkish), the EN-B glider Shaman, the second version of the tandem Nomad and a lightweight hike & fly mini-wing Half Life 16. I am also working on an EN-D glider and an acrowing, together with acro pilot Ferdi Toy and others. Additionally, I design harnesses, bags and other equipment.

I would like to make gliders that are safe, light, durable and affordable. I love hike & fly myself and like to hike up the Babadağ in the winter to fly. The gliders have a lot to endure in Turkey because of the rocky ground, the bright sun and the humidity in the air, so strong materials are important. That is why, for example, the lines are all sheathed. In addition, most Turkish pilots are recreational pilots who like to fly a safe glider. And finally, Turks do not want to pay too much either. I think I made a nice compromise.

The first version of my tandem I have flown 400 hours myself and it still flies well. That is a lot of hours on the glider in comparison with the other tandem gliders that we use here. The second version of the Nomad is more dynamic and is popular with local tandem pilots. In Ölüdeniz only, 30 Nomad2 tandem gliders are used.

The gliders are currently still being produced in Thailand, but I am working on setting up a Turkish sewing workshop. These people must first be trained and gain a few months of experience. All this time they must have an income so setting up such a studio is a costly process.

This year I have sold 80 gliders, which I think is a good number. Selling over a hundred gliders in 2018 would be nice. I do not have to drive a big, shiny car and I have my work as a tandem pilot, although I would like to be a full-time glider designer in the future. I find it much more interesting to do and it also gives me time to fly more, both for testing ideas and for flying more competitions."

This interview was published in Cross Country Magazine no. 194, October 2018