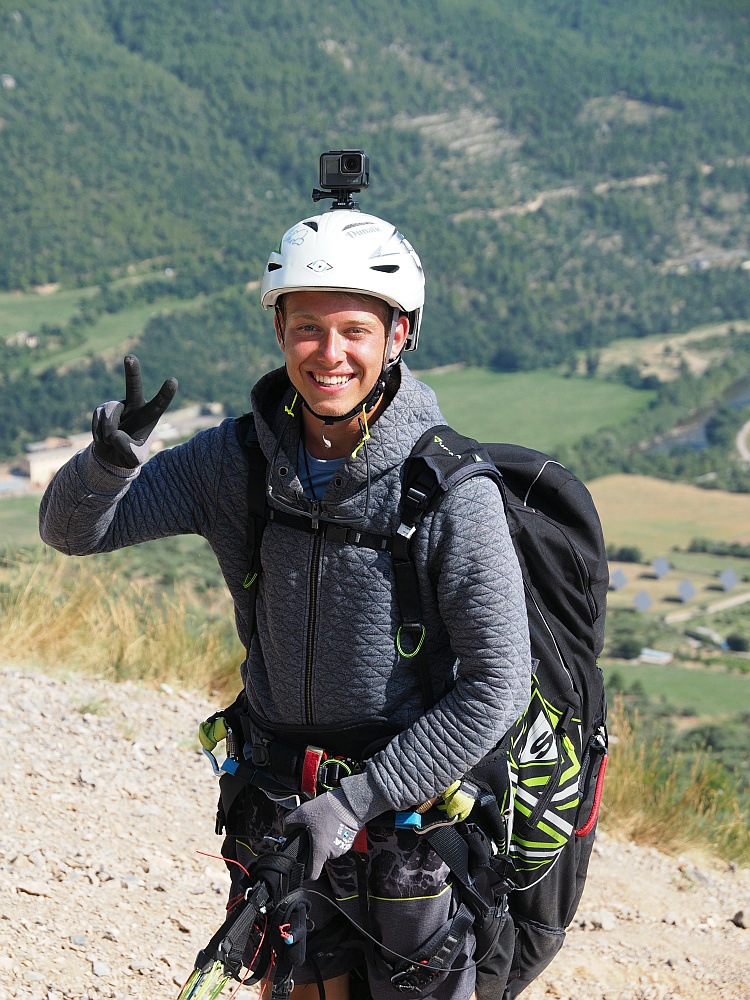 “I’m living the dream as one of the youngest competing acro paragliding pilots. There are no mountains to fly in my country. But I still managed to do my first tumbles at the age of 16 and ranking 14th in the King of Brenta in my first competition this year.

I live with my family near the coast in Alkmaar, The Netherlands. My father has been flying paragliders for a long time, soaring the Dutch dunes or in the mountains elsewhere. When I was 10 years old, I played for the first time with a paraglider on Dune du Pyla. At age 14 I was really inspired by all the pilots at the Ölüdeniz Airgames and tried some forward launches. After a week of groundhandling on the beach in Holland, I made my first flight and since then I was addicted. I never forget the feeling of that day at sunset, enjoying my first flight. I couldn’t believe it at this time…

A year later, my father took me to Ölüdeniz for an SIV and he taught me a SAT. A few days later, I was doing my first heli turns and dynamic full-stalls. Another year later I did my first vertical turns of infinity tumbling.

I love the adrenaline and the G-forces in acro manoeuvres. I like to play with my glider and learn how my glider behaves in certain situations. I get comfortable after flying acro, because you learn so much about recovering mistakes. It gives you a safe feeling so you can enjoy every second of your flight.

The season of 2018 I wanted to do my first competition. I wanted to know the experience to compete and what it is like to fly at a level this high in acro. I estimated my position in the King of Brenta between ranking 16 and 25. I ended up in 14th position. I am super proud of this ranking and to see my name between all the big names where I dreamed of three years ago. My second competition was the China Air Games in Guizhou in August where I earned fifth place in the acro competition and third in the accuracy landing competition.

I wouldn’t be at this point without my father Bas de Weert. He is my biggest supporter. Het taught me a lot about flying and he provided me with everything I needed like holidays, gear and the best support. Without him I could not make this dream possible.

As a pilot living in a flat country, I have to grasp every opportunity to fly. From april onwards, I’m on the tow field every Sunday. Strong wind soaring at the dunes near our home also helped to build my skills like spin landings or twisted flying. But I’ve reached my limits there. You’re too close to the ground to do any manoeuvres. I just fly the dunes for fun and to enjoy my time.

When I am at home, I try to invest a lot of time in analysing my video’s. I’m watching videos from myself and other pilots every day. Two years ago, I got in contact with other pilots to ask questions and help to analyse my tricks. Now I am proud to help other pilots with analysing their video’s and telling them all the experience I have learned in these years."

This article was published in edited form in Cross Country magazine issue 199, May 2019.